Stopića cave is situated on the north-eastern side of Zlatibor Mountain between the villages Rožanstvo and Trnava. It is 250km away from Belgrade, 30km from Užice and only 19km from Zlatibor tourist centre. The main road Zlatibor-Sirogojno goes above the cave and there is an access path from it to the very cave. Stopića cave is a river cave with the Trnavski stream flowing through it. It consists of three speleological and hydrologic horizons: the periodically flooded horizon, the river horizon and the youngest horizon the crack. Without its youngest system Stopića cave is 1,691.5m long, it covers the area of 7,911.5 m2 and its volume is over 120,000 m3. The cave has got an impressive entrance hole from the right side of the Prištavica River. The entrance is at 711.18m above sea level; it is 35 m wide and 18 m high. Limestone layer in the cave dates from trias period and is over 100m thick. The climate in the cave is under the influence of the outer climate, it’s cold in winter and hot in summer. The cave got it name after the settlement Stopići that belongs to the village Rožanstvo. The first written data about the cave were given by Radoslav Vasović in 1901 in the Serbian Geologists’ Association report and the first speleological researches were done by our great research worker and father of our scientific speleology Jovan Cvijić in the years 1909 and 1913. There are five units of Stopića cave: the bright hall, the dark hall, the great hall with baths, the canal with baths and the river canal. The tourist part of the cave has got some attractive elements like: spacious entrance, “dugure”-the openings on the ceiling, sipar arch “Dog’s cemetery”, “The source of life” waterfall and a number of “siga” tubs. Because of their uniqueness, the "siga" tubs are the greatest attraction of the cave. They were made by deposited limestone. They are dents bordered by walls of stone or by winding vermilion “siga” wrinkles in which water collects and later flows over the tubs to the lower ones. "Siga" tubs are periodically flooded and they stand out from the others in Serbia by their size and depth (some are up to 7m deep). In the River canal there is a whirlpool above which “siga” toboggan arises. It becomes the “siga” cascades between which there are the “siga” tubs and “enormous pots”. Water is pouring down the cascades forming waterfalls when there is little water, while when there is a lot of water one unique waterfall, whose height is 9.44 m, is formed. 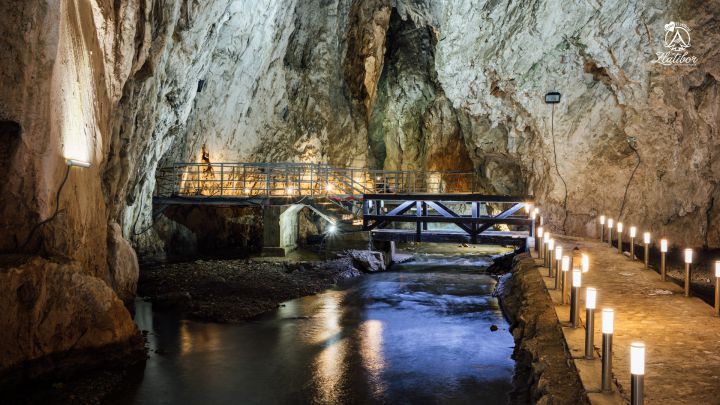 You can’t hear the person you are talking to because of deafening noise of water. It looks as if the foamy water mass is falling down from the heaven, the air trembles of tiny drops, cold comes from the wet walls and the visitor feels horror-stuck in the pitch darkness of this cave. In spite of this the waterfall has been called “The spring of life.”