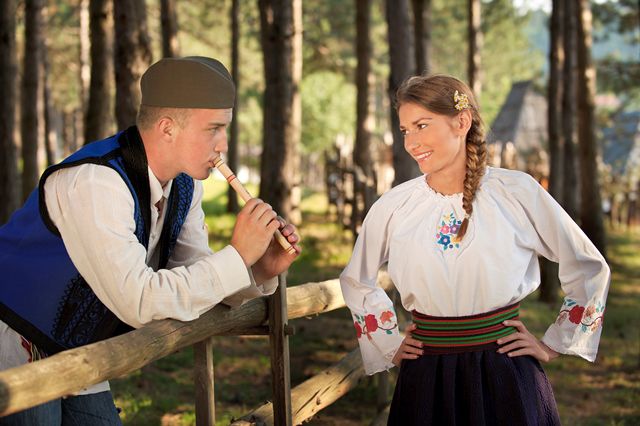 Obligatory part of men clothes were “shirt” and “pants”, also colorful woolen “belt” , special marks gave “pelengiri” or “pelengaće” – a kind of wider trousers made of woolen cloth (pelengiri) or linen (pelengaće) in white or dark brown color. As for the upper parts of clothes “zubunić” or “gunjić”, then “đečerma”, “đžamadan” and “gunj” were worn. On the head they wore a red fez (“ves”) with a tassel black woolen knitted cap “šubara” and, after Serbian-Turkish war in the 1880s more often, “šajkače” (a type of Yugoslav soldier’s cap). In winter a woolen knitted scarf was wrapped around the cap and in summer a straw hat

was worn. Over all those clothes a red cloak was thrown over which people usually wore while travelling on horseback. On their feet they wore socks, “priglavci” (kind of stockings), “nazuvci” (knitted toe-wormer, worn over socks), “prijesni”, “crveni” and “građjeni opanci” (handmade peasant shoes) as well as in women’s clothes. They also wore heavy cloth “tozluci” or “dokoljenice” (knee socks). (Bjeladinović, Ćaldović, 2007) 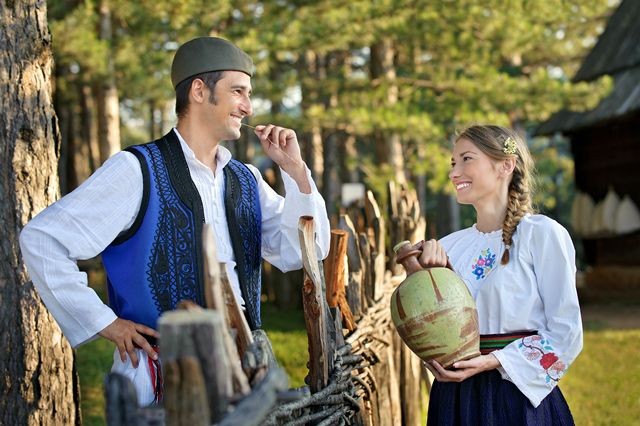 The whole repertoire of Zlatibor region national dances and games could be classified as:

Among horo games a significant part belongs to ritual games whose influence is seen in wedding ceremonies and their aim is to protect a matrimony against a spell, while in a posthumous ritual they should enable the deceased person a connection with “this world” and to “see him off” to the “other“ world. Fairs were organized in time of pre-Slava, church holidays, after cross bearer procession, and dances most often on Saturdays. On outdoor working parties and spinning evenings they played games and dances after finishing work.

Outdoor working parties, shepherds’ games and children’s games had no music accompaniment. The participants were mainly young people so lascivious and indecent jokes could be told, or young boys competed in order to get in favor with the girls or show themselves off with their skills or strength.

No matter how much work the children had to do, they found time for games. The favorite ones were “tutumiša, sinova, žmure”. “Tutumiš” was the same as today’s popular children’s game “ćorave bake” (blind grannies). Children all over Užice played them. (Vasić, 1990)

SONGS AND DANCES OF ZLATIBOR REGION

Musical accompaniment. Užice region folk musicians use a shepherd’s flute, “dvojenice”, as well as industrial made instruments. In Zlatibor villages they used to play to the accompaniment of the “paljke” and drums. “Paljka” as a name for a pumpkin is also a name of Zlatibor region musical instrument. There are two types of it: one is a pumpkin in which a clarinet type mouth piece made of elder tree is stuck, the other is an instrument made as a simple imitation of a clarinet. As “the imported” instruments, the accordion and the clarinet have found their place in local music. We must mention brass orchestras (trumpets) that appeared in Zlatibor region between the two wars and came to their full significance in the 60s of last century by establishing the famous Dragačevo meetings and later western Serbia trumpet players meeting. (Golemović, 2007) 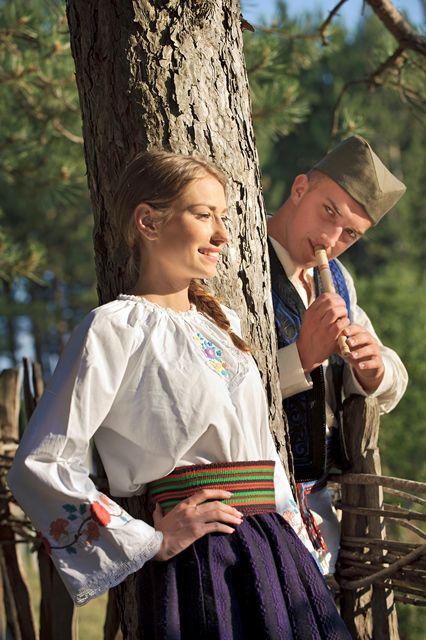 Girls and women wore a long dinar – type shirt made of hemp ("thick" – "heavy bez"), also of linen ("ćeten bez"), and for Sundays or holidays of half cotton ("woven and cotton bez") canvas.

As upper part of clothes they wore a short sleeveless embroidered heavy cloth jacket (jelek) called "prsluk" and over it a white heavy cloth "zubun", a kind of short sleeved jacket, on the front side under the waist they wore a narrow apron "prežina". Black embroidered woolen stockings and "gradjeni opanci", (a kind of handmade peasant shoes) were worn. Girls wore two braids around their head and for special occasion, like a holiday, they placed a flat red "fesić" (fez – hat) on their head, while there were strings of golden or silver money worn around their neck. In winter a long pleated woolen skirt was worn and above a heavy cloth "prsluk" or "grudnjak pamuklija" (vest of cotton), "gunj" - a short peasant heavy cloth jacket with long sleeves was worn. Some women also wore a long white "aljina" (dress) over all of it. As a part of bride’s or holiday "Sunday" dress, well-off people wore "libade" (a type of silk or velvet women’s blouse) and a silk belt "bojader". One of basic characteristics of women’s clothing was covering their head.

Jewelry made of dry plant fruit was worn, most often a neckless of "karavilje" (dianthus), which smells nice when it is damp. (Bjelanović – Jergić, Čaldovićs, 2007). 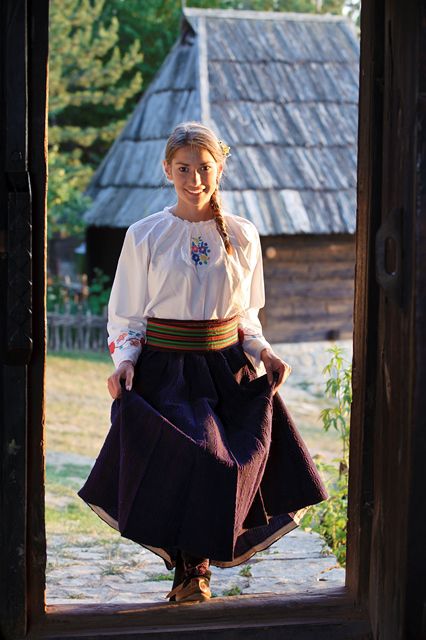