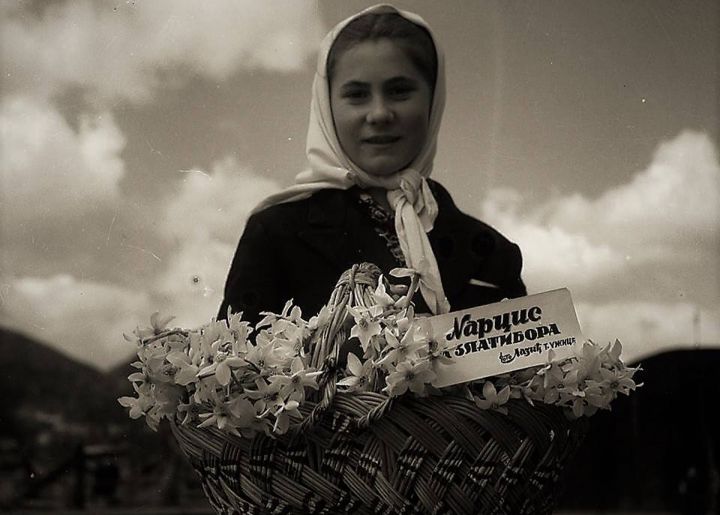 At a time when Zlatibor makes a record visit and accepts the highest number of guests in its rich tourist history, with special pride and satisfaction in 2018 we mark an exceptional jubilee - 125 years of organized tourism on this mountain.

It has been an entire century and a quarter of a century since the modest beginnings with the first tourists, the lifting of Kraljeva česma and the discovery of the beauty of the "Golden Mountain", to the present splendid and modern tourist place, like a magnet attractive for guests, with a prestigious title of the most visited mountain in Serbia.

At this important stage of such a long, always upward path, we are proud of the rich past and tradition of Zlatibor's tourism, whose success was patiently built by generations of tourist workers. The jubilee is a true proof of lasting and sustainability, confirmation of the value of Zlatibor as a mountain God-given for tourism, an indispensable argument that what lasts so much is worth it. Of course, a reliable sign that this fragrant plateau, surrounded by peaks, deserved the top place in Serbian tourism.

Recalling the beginnings of organized tourism here always leads us to 1893, on the Transfiguration on August 19th. This is the date of the most important event of that time, as today's inscription is engraved on a fountain near the lake in the center of the mountain. This source is not called by chance Royal (Kraljevi), because then the young king of Serbia came to Zlatibor, Alexander Obrenović, and without a doubt he supported the intention of Zlatibor hosts, familiar with the blessings of the mountain where the healing "the rose of the winds" blows, to create an air spa here. That is why, at the place where the king used to dine, the fountain was built, after which the entire settlement was named the Royal Water (Kraljeva voda).

They then arrived in the new air spa, the first tourists eager to rest and recover in a beneficial nature, in the smells of meadows and conifers. Plain huts or modest rooms were used to accommodate in small houses of the poor, at the time, but hospitable people of Zlatibor. A powerful wind in the back of this newly started business was given by another visit to the crowned head, the ruler from the second Serbian dynasty. In 1908, King Petar Prvi Karađorđević was staying in Zlatibor, after which the first major accommodation facilities were built here: the hotel "Kraljeva voda" and the villa "Čigota", as well as the first bakery. A story about the healing and beauty of the "Golden Mountain" began in Serbia then, but the sufferings of the Great War temporarily halted the start of the tourist drive.

With the arrival of peace and the creation of the Yugoslav kingdom, Zlatibor is turning to tourism again. There are new villas and summerhouses here, a motorway from the direction of Užice, guests arrive at a holiday in the beauty "where the kings recovered". The enterprising hosts see a chance to earn money and, alongside Kraljeva Voda, other Zlatibor excursions become well-known: Palisad, Oko, Ribnica. In 1931, a tourist village got a water supply system, as the water from the source of Đurkovac and Alexander's fountains pumps were pumped into the reservoir. A special resort is developed on Oka, where, thanks to the benefactor Radosav Simić, a children's resort and a national bath with two swimming pools, a pond, restaurant, with several wooden buildings with 20 rooms. At Palisad, villas of Belgrade traders and lawyers are being built, Ribnica becomes synonymous with the place of the fastest recovery. But then there is another bloody war, in which many golden objects for the accommodation of guests will be destroyed.

In the postwar period, the buildings are being renovated and the lake is arranged in the center of the mountain. With the progress of the standards of the fifties and sixties of the 20th century, Zlatibor again gained significance. This is followed by a rapid rise in the construction of accommodation facilities on this mountain. Foremost, in 1965, brilliantly decorated hotel "Palisad" started to work, the leading name of Zlatibor hospitality for decades. The special health institution "Zlatibor" (today's "Čigota") is being built, also other facilities for accommodation and restaurants, the settlement is being regulated. Many private weekend houses are being constructed, as well as hundreds of smaller and larger holiday homes that give a modern look to the center of the mountain.

As time passed, Zlatibor became more and more well-organized. There are stadiums and sports courts, arranged ski slopes at Obudojevica, and then a ski center bellow Tornik. Hotel “Lovac” is being built in Vodice, followed by "Jugopetrol", "Zelenkada", "Dunav", and later "Olimp", "Zlatibor Mona", many resorts in the tourist heart of the mountains, shopping malls, cafes, wide streets, Kraljev trg... Abruptly, with significant investments, the comfort in the accommodation facilities was improved, where owners created modern apartments from the existing ones.

Chroniclers of Zlatibor events at that time best testified about how fast Zlatibor made its progress. As Milisav Đenić wrote, it was a great journey: from the cottages and lodges to the apartments and residences, from Rzav whirpools to the Olympic pools, from a field and hacky sack to modern stadiums and halls...

The mountain did not give in even to the difficult ‘90s, it successfully resisted this unfavorable time for tourism. The new millennium brought Zlatibor even more guests and modern content, the status of one of the most important centers that, with number of guests, overtook many spas and reached the level of coastal tourist destinations. Medical-therapeutic, transit, sports-recreational, manifestation tourism, congress gatherings, relaxation and tourism in the countryside became a hallmark of the "Golden Mountain" holiday.

Today Zlatibor is the mountain where 30,000 visitors per day are staying in tourist "peak days". Over the course of the year it attracts over 250,000 tourists who receive over a million overnight stays. Domestic guests are still loyal to Zlatibor, and more and more foreigners: Germans, Dutch, Russian, Czech, Chinese and others discover the beauty of this mountain. Now there are many villas and cottages, excellent hotels, restaurants, summer baths, various contents. In summer, Zlatibor is ideal for preparing athletes, with quality courts with good surfaces. Winter is suitable for skiing and enjoying the snow in a large ski center on Tornik, where there is a six-seater cable car and artificial snow, or on the slopes of Obudojevica, in the center of the village, with several shorter slopes and smaller ski lifts. In the center of the mountain there are also attractive Dino park and adventure parks, soon the longest panoramic gondola that will lead from here to the top of Tornik.

They say that the holiday at Zlatibor is now a "trend". Here residents of urban areas have a refuge from the city bustle, "charge the batteries" before the busy everyday life, try the best prosciutto, kajmak, a set of buns, enjoy the charms of the "mountain breakfast". Be seen and see the well-known, is the unwritten rule that applies here.

The mountain is an ideal place for those who like being lazy on Zlatibor sun for hours in restaurant gardens, as well as for those who like active holidays, lovers of investing effort and views from the highest peaks. The guests do not rest only around Kraljeve Vode, but also in the surrounding villages: Sirogojno, Gostilje, Jablanica, Rudine, Rožanstvo, Ljubiša, Tripkova, with selected domestic food and the attention of the host. They gladly visit Stopića cave with the most beautiful sinter pools, during summer they enjoy many bathing areas, go on trips to the nearby "Šarganska osmica", sail the river Drina from Perućac to Višegradska Ćuprija...

Zlatibor, therefore, in full shine and at its best, welcomes its 125 years of tourism. The jubilee is commemorated with a series of contents: in the days around the Transfiguration, when there will be something interesting for everyone which a reminder of the long tourist tradition, as well as various programs throughout the year. This mountain, no doubt, really deserves it. 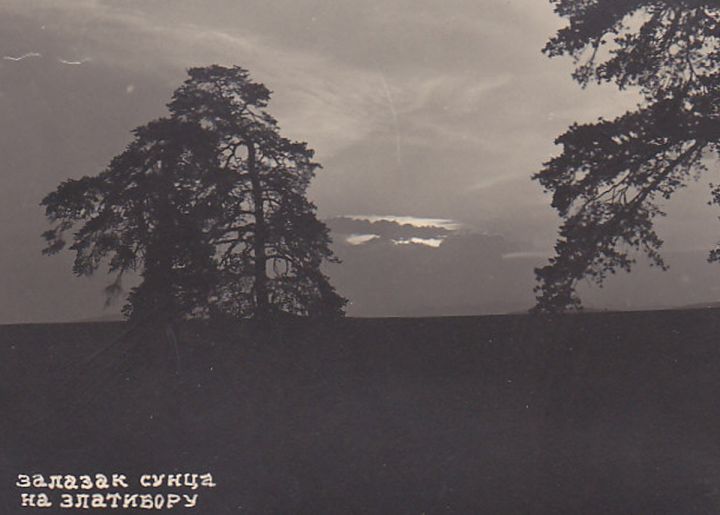 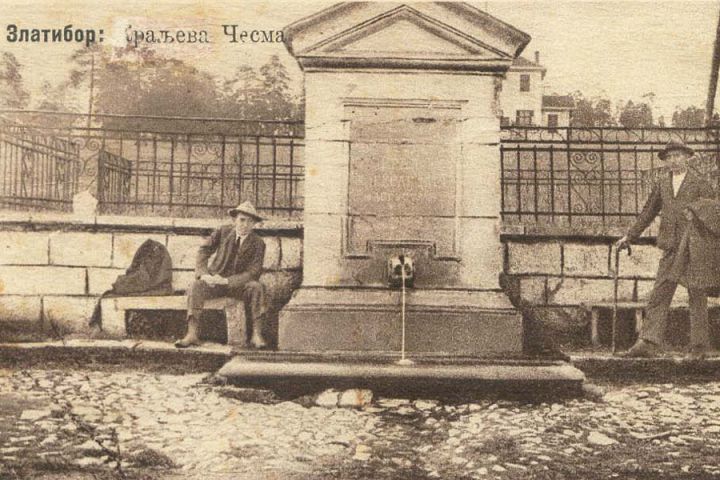 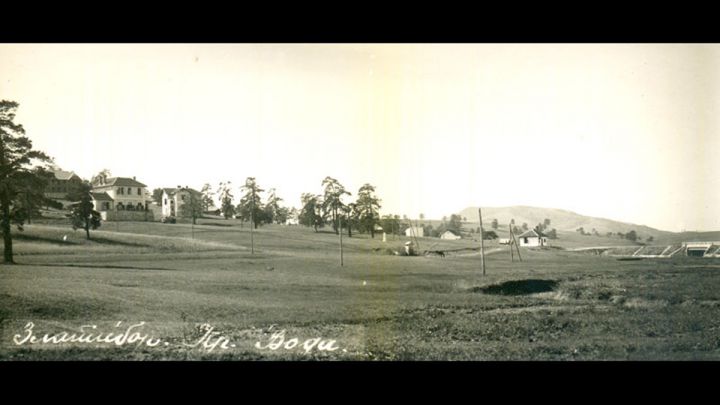 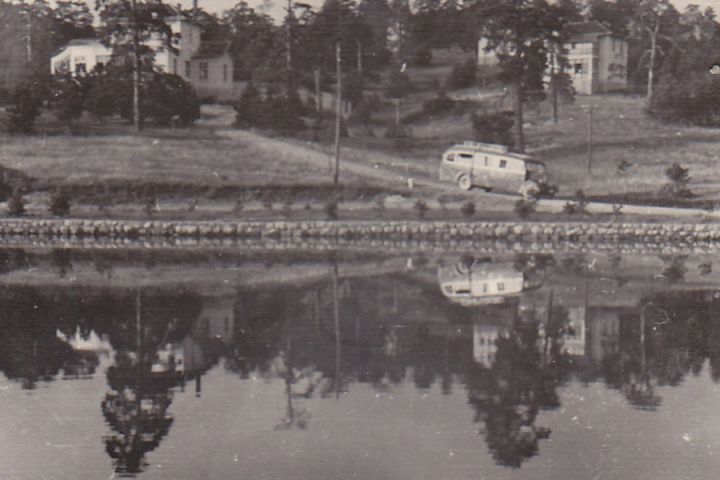 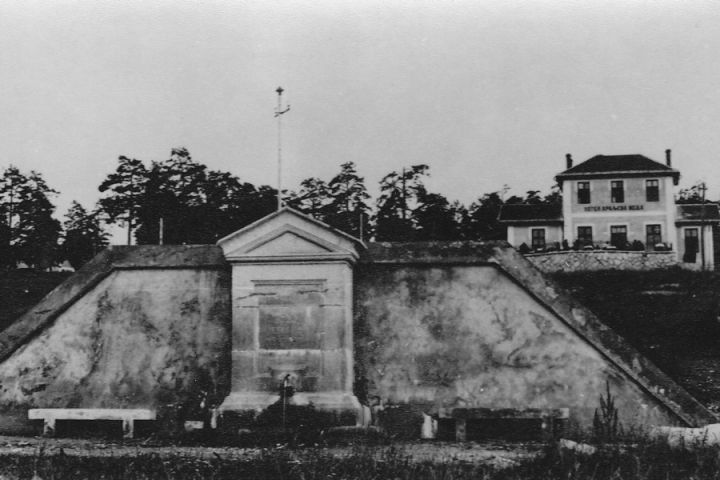 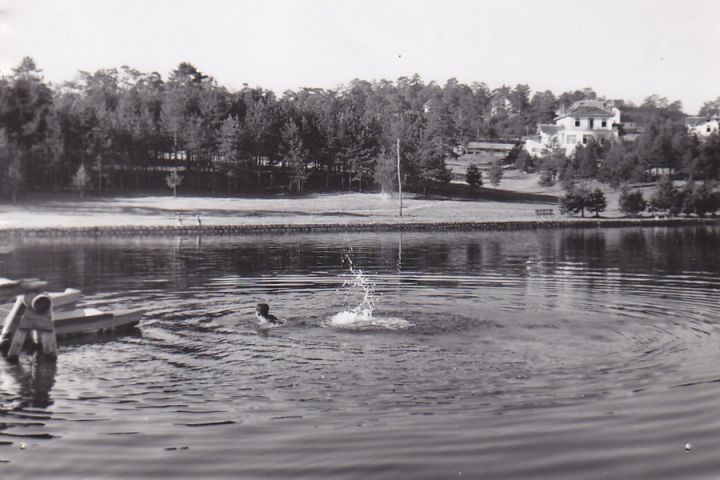 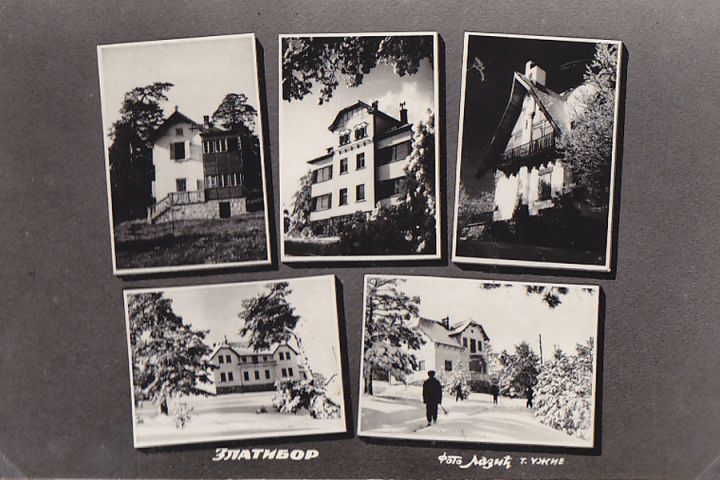 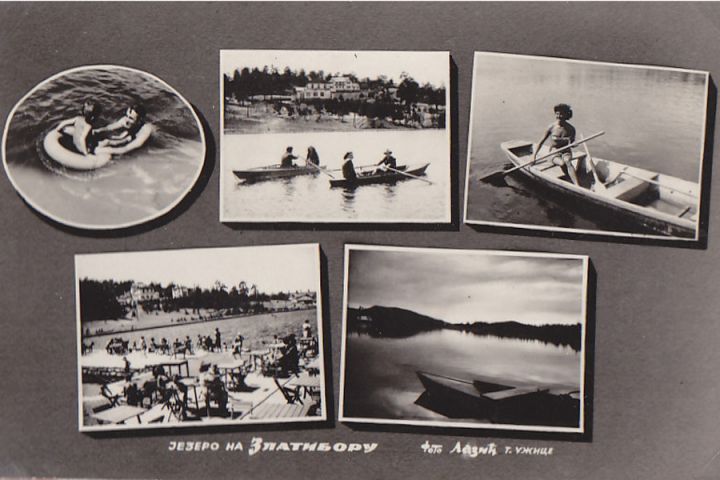 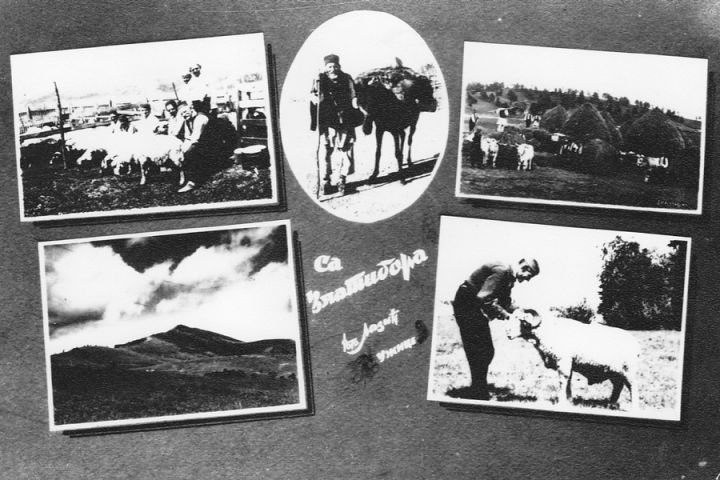 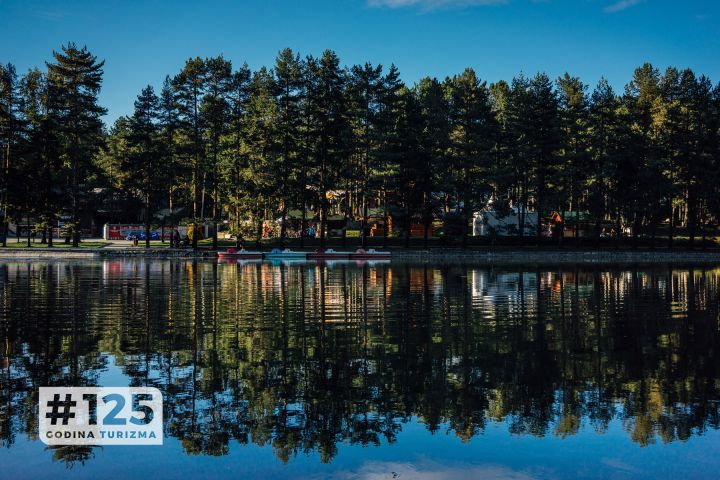 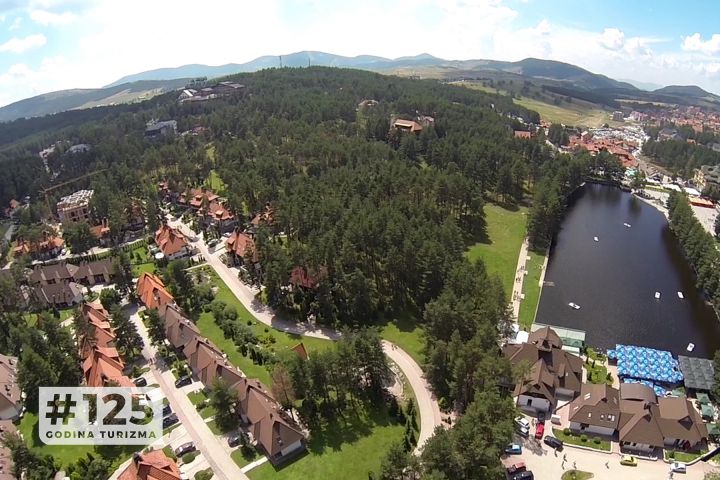 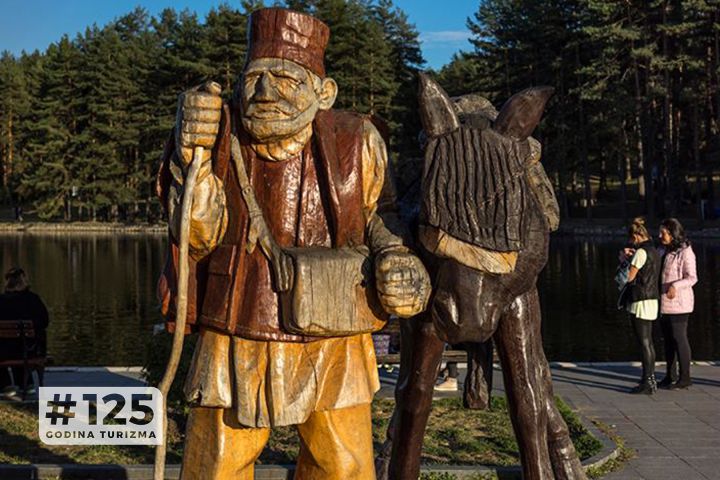 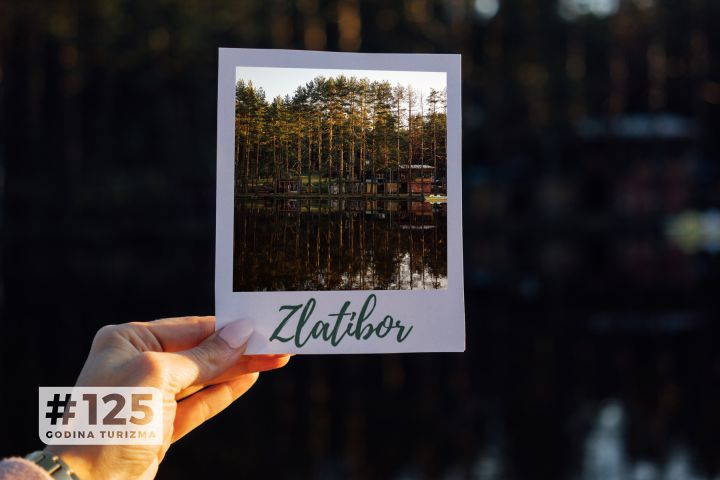 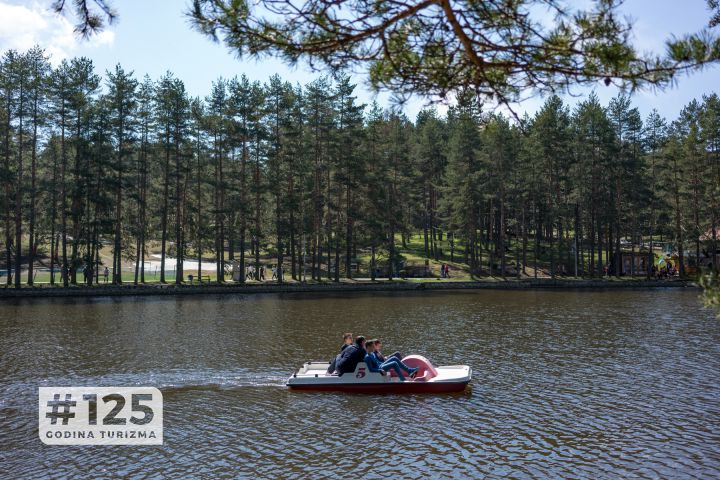